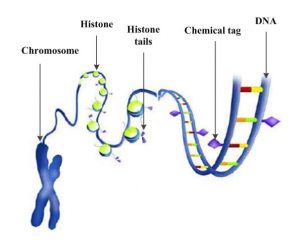 A widely used illustration that shows chemical tags (purple diamonds) and the “tails” of histone proteins (purple triangles) marking DNA to determine which genes will be transcribed.

In genetics, biological cells hide the genes that are not supposed to be effective in the cell, while they could be active in another cell. The deoxyribonucleic acid (DNA) in genetics is organized into a long structure called chromosome (see next Figure). Genes, which are instructions for making a protein, are contained in the DNA and are coded with a specific language with 64 words. Difference in each word, makes genes to produce different proteins, making cells of distinct organs function differently. For example, an eye cell is shut off in the lung and
breathing genes are shut off in the eyes. This duty scheduling is done in another layer of coding in histone which tells genes in a cell what coding they should read and what they should shut off*. This information in the histone about the status of the genes are inheritable to the next generations** and the genes that are shut off are called hidden genes.

Tags are appended to chromosomes to identify which genes are hidden. These binary tags evolve over subsequent generations based on logical or stochastic operations.

Watch a short video on HGGA

Any opinions, findings, and conclusions or recommendations expressed in this material are those of the author(s) and do not necessarily reflect the views of the National Science Foundation.