Statement: The optimization of air-fuel mixing is important to characterize the diesel spray combustion related to advanced engine conditions. A series of spray dynamics have been investigated to understand the spray fundamentals. Spray fundamentals include non-vaporizing spray, vaporizing spray and combusting spray. Non-vaporizing spray includes a characterization of fuel dependency, chamber pressure dependency and charged gas temperature effects. Spray structures were quantified for penetration length, spray envelope, and detailed spray associated with air entrainment.  For vaporizing spray, the quantification of vapor and liquid portions are characterized while combustion spray, multiple laser-based diagnostics are applied to characterize.

As example, Figure below shows the penetrations of the liquid and vapor phases in both non-reacting and reacting environments for the two different nozzles. For all the tested conditions the measured liquid lengths, in reacting and no-reacting environments, are essentially the same because the magnitude of heat release seems to be insensitive to the liquid boundary.  Regarding the vapor phase, vapor penetrations in reacting and non-reacting conditions develop similarly up to the start of the combustion event. After the ignition, the flame front penetration become longer than the vapor in no-reacting ambient due to the pressure boost generated by the combustion. 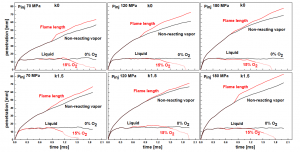